Jacqueline Spedding is a Blue Mountains based artist with a Master of Fine Arts majoring in ceramics from Sydney College of the Arts. In 2010 she was awarded a Zelda Stedman travelling scholarship to spend a semester in the Master of Ceramics program at Cardiff School of Art and Design in Wales, UK. After graduating in 2012 Spedding co-founded and ran Cascade Artists’ Studios, a shared space for local and visiting artists, in Lawson where she lives. In 2017 she relocated her studio to the Old Lithgow Pottery.

Spedding’s artwork has been exhibited in public and private galleries, artist-run initiatives and non-traditional art spaces. In 2017 she produced a site-specific artwork for the inaugural Field Trip exhibition, an independent curatorial project held in conjunction with Bilpin International Ground for Creative Initiatives – BigCi. Previous site-specific works include her 2015 installation, Shelter, at the National Trust’s Woodford Academy in the Blue Mountains and Transcend, an installation of ceramic works that won the major acquisitive award at Sculpture at Scenic World, an annual exhibition of sculpture installed in the Jurassic rainforest of the Megalong Valley.

Spedding has exhibited in group exhibitions at the Blue Mountains City Art Gallery, Western Plains Cultural Centre, Royal Botanic Gardens Sydney and ArtXchange Gallery, Seattle, USA. Her work featured in a national review of ceramics, Homebrand, at the Casula Powerhouse and she was selected for Hatched, a national review of emerging artists held at the Perth Institute of Contemporary Art (PICA).

She has taught fine art and ceramics as a casual lecturer for Federation University, Sydney College of the Arts and Ceramics Design Studio Gymea TAFE. She currently works as a Senior Collections Officer for Sydney University Museums.

My art practice encompasses a range of media, including found objects and organic materials, and takes the form of sculptural objects and site-specific installations. Ideas of materiality and flux, arising from feminist theories of the body, and our interconnectedness with all living entities and the environments we share, are ongoing research interests in my work.

For this exhibition I have taken impressions from the sandstone pathways surrounding the Academy and used these to create a series of imaginary star maps. Using a home planetarium I will project these maps onto the ceiling of the servants’ dining room, located just off the main courtyard. 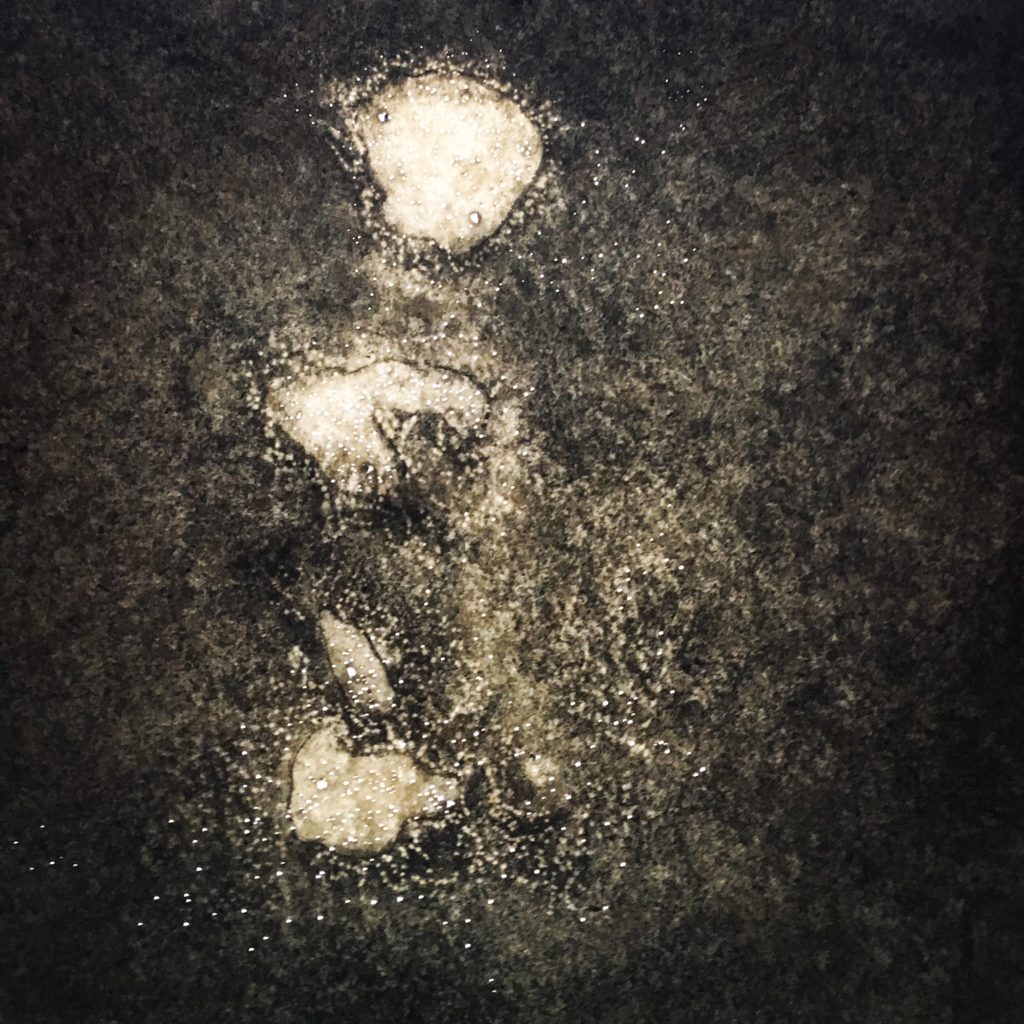 The illusory maps draw on historical accounts of the 1874 Transit of Venus expedition and aspects of Aboriginal astronomy related by local Darug man, Chris Tobin. Connected to concepts of observation and ecology, the maps arose while walking the Academy’s paths and mentally tracing the rhythm of indents and shadows in the stones. In the chisel marks, each block becomes a record of the percussion of its making, the weathered and pitted stone carrying multiple narratives of people and place over time.

Nose to the ground, the marks on the stones form abstract landscapes reminiscent of images of the surface of the moon. As I pressed thick wet blotting paper onto the stones and peeled it back, soft blisters and faint scars appeared embossed on the drying paper. They suggested landscapes and constellations, swirling black holes on one side and rough terrain on the other. They brought to mind the bent backs and bruised knees of the servants tasked with scrubbing the stones clean, the agitation of water and sand deepening the already weathered marks.

When Aboriginal people look to the night sky they look between the stars, discerning in those shadowy depths the figures of the Dreamtime whose appearance and related stories pass on knowledge about how to live such as the growth of certain plants, the right time to collect certain foods or to conduct business.

In contrast, the purpose of Transit of Venus expedition was to obtain reliable data that could be used to calculate the exact distance of the earth from the sun and in doing so formulate an accepted astronomical unit. Like the inch was to the King’s thumb, the AU is the unit by which all other planets, stars, galaxies and constellations are measured in relation to the earth, allowing scientists to “perceive clearly what would otherwise remain in the shadow.”[1] 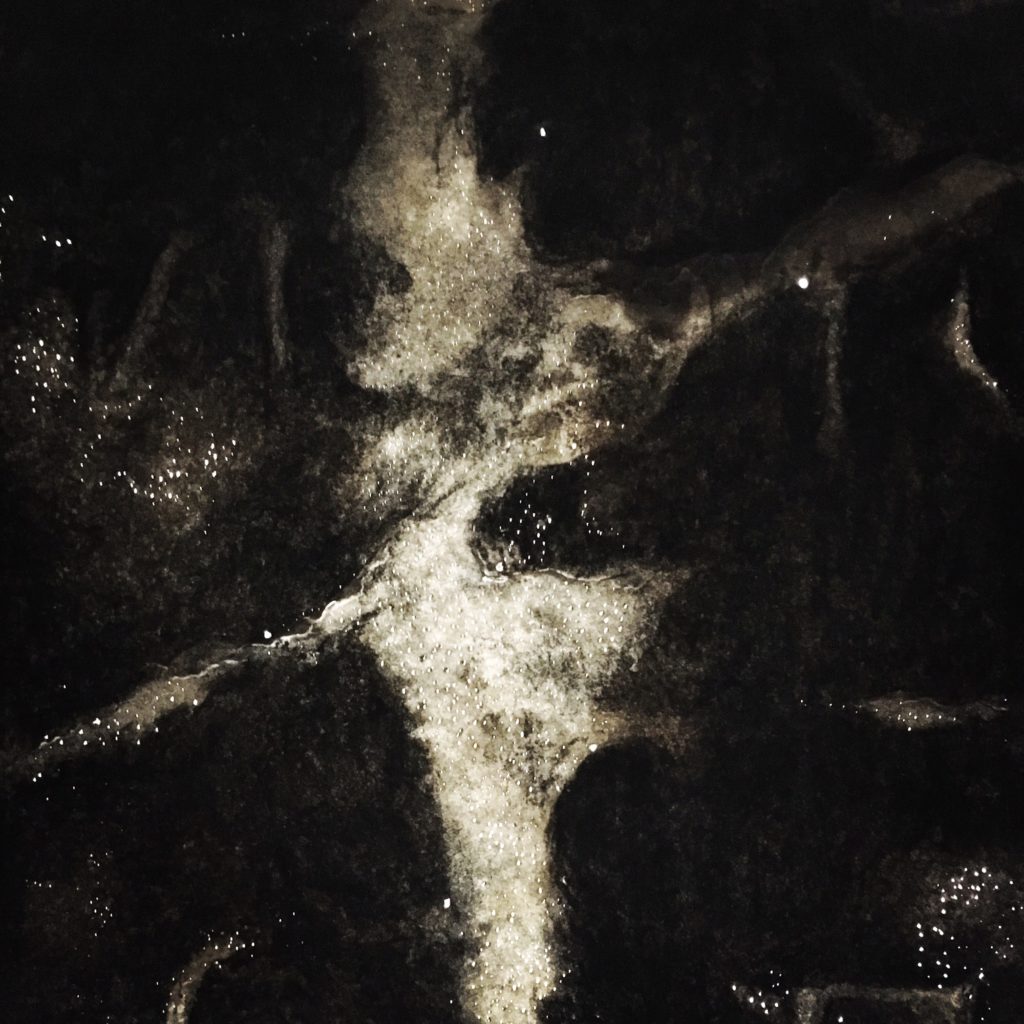 My installation touches on both Enlightenment and Indigenous knowledge systems. The projected night skies are fictional yet grounded in the fabric of the building, the bodies that shaped it, and the site on which it sits, suggesting alternative narratives.