The following material was drawn from artists’ statements and bios. Further information about the works on exhibition will also be added after the close of the exhibition. 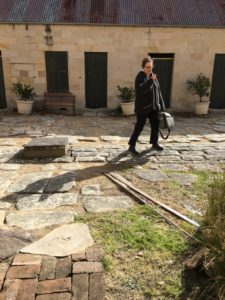 In reaction to the historically dense saturation of significant stories surrounding the Woodford Academy site, this work acknowledges the void.

The void is the complete history of the site, such as: movement of the stars, air, fire, water and earth; growth of flora and fauna; occupation by Durug and Gundungurra people and post-colonial settlement; use for star gazing, ritual, gatherings, hunting, drinking, residence, education, relaxation, sanctuary and historicity; experiences of the sublime, happiness, infatuation, love, sadness, anger, fear and regret; and ……..(read more).

Birds in Space is a collection of works that inhabit the hallway of Woodford academy. The sound is recordings of birds found around Woodford mixed with Space recordings made by NASA. The record is made in NZ by Peter King and is hand-cut by a lathe machine. The space theme in the sound recording is continued through the hallway by the hanging glassworks (read more).

Vivienne Dadour’s art practice since 1992 has investigated issues that confront political and social issues concerning the complexities of identity and cultural difference. This has led her to seek interpretive strategies that consider ethical alternatives that challenge aspects of mainstream political discourse while encouraging dialogue and fostering tolerance of religious and cultural diversity. In her practice she focuses on specific communities and often works collaboratively with other artists (read more).

Much of the work Darkroom has produced has responded to ideas about the subjective nature of personal and social histories and narratives. To date Darkroom has produced three distinct bodies of work. The Glenn Meranguey Project,, The Bylong Valley Project and the upcoming Caroline Collits project (read more).

My current art practice is a cross-disciplinary and cross-community collaborative investigation of the processes of medicalised dying. Grounded in my personal experience of the death of my father after four and a half months in ICU, I combine that emotional landscape with medical practices – specifically, the definitions of death, the materiality of blood and body parts and the processes of surveillance. This is an ongoing project – Blood on Silk started in 2009 in collaboration with the late physicist Dr Peter Domachuk. I am soon to complete a PhD at the University of Sydney. I hold a B.Sc, UNSW), a Bachelor of Visual Art (UWS) and was awarded a MFA from Monash University (read more).

Beata Geyer is a visual artist based in the Blue Mountains with the artistic practice encompasses variety of media, from painting, sculpture, photography and video to large scale, site-specific installations, architectural interventions and public art projects.

Beata graduated from the University of Sydney, Sydney College of the Arts with a Masters of Visual Arts Degree where she also attained BVA Honours 1st class. She previously studied Architecture and Urban Design in Warsaw at the Warsaw University of Technology and Photography and Design in London at the City of Westminster College (read more). 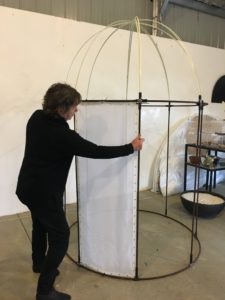 My work is always about people, their habitations and their things; I make portraits about the real or imagined history of places and of people and I assemble installations attempting to distill something the subject. I collect tools, culinary implements, measuring devices, combs and brushes; all of these things relate to some kind of repeated human activity.

These sounds and the rhythms of these activities are part of everyday life and the ordinary objects we use to order our world. My intention is to transform a known and ordinary thing into something new and not previously imagined (read more).

The heavy sandstone of Woodford Academy has been screaming permanence to me. Its solid and colonial structure along the highway in this hostile and sometimes harsh environment is overshadowed by a huge tree. I am told it is about 70 to 80 years old. It adds to the theatrics of the Woodford Academy, to its haunting tales, to the colonial architecture placed in the Australian landscape.

I am interested in how this space acts a medium for our collective imagination, projecting our own narratives. Pondering and imagining the people and stories, both colonial and Aboriginal (read more).

In Dissolution line, Knezevic films an occurrence that would happen even if the camera were not rolling. In a suburb, in the background, on the Hills Hoist or washing line hang the newly cleaned clothes and doilies that surround her home. They are being dried overnight. The wind is strong, as a storm is brewing.

The work is reminiscent of the nostalgia, the apprehension of the everyday and the longing of home. The sensor light turns on at times, highlighting a hyperawareness of movement as well as an association with a being that is lurking. Just before the storm hits, the washing is taken off the line (read more).

Daniel Kojta passed away suddenly and tragically on 24 January 2018. Modern Art Projects Blue Mountains would like to acknowledge the substantial contribution Dan made as an innovative and brave artist participating in many group shows, as a very supportive member of the Association and as a member of the MAPBM Committee. Dan’s work for the 2017 Explorers: narratives of site project demonstrated his commitment to exploration in both the production of contemporary art and in life.

It is rare to find a material that creates space in the studio. My practice has become enamoured by the reflective and reductive personality of mirror. As an artist I am constantly evolving, responding, and seeing possibilities in materials and concepts in differing divisions of time… still, moving image, installation… differing tangents of meaning; often the first and then finally last element to emerge as a gift that wraps each facet of the work into completion.

‘Magnetic variation’ is a term used to describe the variables of direction when using a compass and map; transferring map grid reference values to a compass and vice versa. Here, it describes the temperament of presence.

The beauty of emptiness, the lightness, the weightless presence of reflection is as in ‘Magnetic Variation’ a simple mirage. Here the weight of the boulder is reflected as the two planes of object and reflection, time and space, hover to form one object, the space infinite (read more).

My work inhabits the tiny locker room, adjoining the former Woodford Academy classroom, and responds to the stories, both documented and imagined, of the boys who boarded here, and to the memorabilia in this particular room (read more).

All heritage properties have a Statement of Significance and as a sometimes heritage consultant I have helped write many. It always struck me how they were always too narrow in focus and colonial in their assumptions. I have attempted to redress this in my Statement of Insignificance for Woodford Academy by placing it in a much wider context (read more).

Walking the bush trails beyond the Woodford Academy stimulated conversations about the area and its significance. Both historical and personal memories and associations with various sections of the tracks. We are both local to this area and have spent time on these trails over the years, as individuals in separate time frames. By walking and revisiting the three waterfalls on the Transit of Venus Route, and a ruin half way to Paradise, a waterhole known to locals, where an old chimney still stands, we decided on working with specific elements or landmarks which we could then re-contextualise back into the Woodford Academy.

By focussing on these sites, alternate, but very much echoing of the Woodford Academy and the surrounding area, we wanted to allow for histories, or stories, other than the dominant well documented histories within the building itself. But by bringing our work into the building new contradictions and resonances were discovered (read more).

Jacqueline Spedding is a Blue Mountains based artist with a Master of Fine Arts majoring in ceramics from Sydney College of the Arts. In 2010 she was awarded a Zelda Stedman travelling scholarship to spend a semester in the Master of Ceramics program at Cardiff School of Art and Design in Wales, UK. After graduating in 2012 Spedding co-founded and ran Cascade Artists’ Studios, a shared space for local and visiting artists, in Lawson where she lives. In 2017 she relocated her studio to the Old Lithgow Pottery.

Spedding’s artwork has been exhibited in public and private galleries, artist-run initiatives and non-traditional art spaces. In 2017 she produced a site-specific artwork for the inaugural Field Trip exhibition, an independent curatorial project held in conjunction with Bilpin International Ground for Creative Initiatives – BigCi (read more).

Miriam Williamson is a Blue Mountains based sound and visual artist. Her work explores the themes: sense of place, familial ties and historical displacement. In addition to her practice Miriam is an experienced arts administrator and specialist in community based arts events. She is Director of The SLAB, an Artist Run Initiative in Hazelbrook NSW and Curator of The Altitude Project, a series of contemporary art events to be held across Blue Mountains heritage listed sites which share a history of invention, innovation, engineering and technology (read more).